What is Gastroesophageal Reflux?

Gastroesophageal reflux (GER) is involuntary regurgitation of stomach contents into the esophagus. Reflux causes a number of problems:

While reflux is common, it can be hard to diagnose unless suspected. Still, once reflux is identified, very effective medical and surgical therapies exist to control it.

Who is affected by GER?

All babies reflux during their first year of life. Preventing stomach contents from flowing back up the esophagus in humans depends not on a distinct anatomic valve (like the anus or pylorus) but on the interplay of several anatomic and functional factors:

In general, it seems that if any one of these is abnormal, there will be mild reflux. Multiple abnormalities will produce pathologic reflux. In most babies, many of the sphincter mechanisms may not work well, and a “spitty baby” is the result. These problems usually correct themselves as the baby gets older, and the child “grows out” of their reflux, usually around 8-12 months. By this age for example, the abdominal portion of the esophagus has lengthened enough to resist the pressure in the stomach. Of course, if the stomach is upset, it can still produce enough pressure to produce vomiting. This is normal. But sometimes, for various reasons, these abnormalities do not correct as the baby grows. Medical and surgical treatments for reflux attempt to restore some of these functional or anatomical relationships (see Treatment).

What are the Signs and Symptoms of GER?

Frequent regurgitation of feeding is the most common evidence of GER. All babies regurgitate, but if nutrition is compromised, medical attention should be sought. In the newborn, GER may cause a lowering of the heart rate and respiratory rate. When stomach fluid remains within the esophagus, the acid causes burning of the esophagus and pain. Some babies exhibit a peculiar arching movement, probably because GER hurts; they are often mistaken to have a neurological problem.

Other symptoms of GER may include:

When the regurgitation reaches the back of the throat at the same time that the baby or child breathes, the material is aspirated into the windpipe and lungs. The aspirated material may cause a chemical or bacterial pneumonia. A child can be thought to have reactive airway disease, asthma, or bronchitis for some years before the real reason, reflux, is found.

There are a few other diseases that can have similar symptoms of reflux:

These other diseases must be ruled out prior to performing the anti-reflux procedure as it may worsen the symptoms.

What Diagnostic or Laboratory Tests Need to be performed to Diagnose Reflux?

What is the Treatment for GER?

What is the Surgical Procedure to Correct GER?

The Nissen fundoplication is almost always done by laparoscopy. Five small incisions(3mm to 5 mm) are made and the procedure is performed using a fiber optic camera providing excellent and detailed anatomy and long, thin (3 mm) instruments. Occasionally, the operation must be done as an open procedure. This is usually because the patient will not tolerate the pressure of the gas placed into the abdomen to help visualization or if there is too much scarring. Rarely, bleeding or abnormal anatomy requires the open technique. These circumstances are very rare and nearly all children have laparoscopic fundoplication in our institution. Our results show that the laparoscopic method allows for a more precise procedure and shortens recovery times. 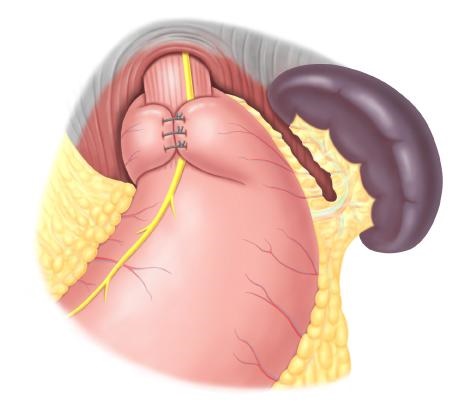 What Other Problems Can Accompany GER?

Are There Post-operative Complications or Long Term Care after a Nissen?

The great majority of patients do very well without any complications or long-term problems after Nissen fundoplication. Anyone undergoing general anesthesia and major surgery has the risk of reaction to the anesthetic or medications, bleeding, and infection.

Disclaimer: Your child's condition is unique. The information contained on this web site is not intended to substitute for advice from a doctor or nurse. If you are unsure about any aspect of your patient's care, please contact us at (303) 839-6001, or talk to your pediatrician.