What is a Congenital Diaphragmatic Hernia (CDH)?

One of the most challenging neonatal problems is congenital diaphragmatic hernia. A CDH occurs during the 10th week of development, when the diaphragm on one side, usually the left, fails to fully fuse closed. Abdominal contents then slip through the defect into the chest. Intestines, stomach, liver and spleen can slide up into the chest, compressing the heart and lungs. Although the presence of intestines in the chest sounds and appears dramatic, the mere presence of intestines in the chest is not in itself particularly dangerous. Instead, it is the abnormal pressure on the developing lungs and heart that cause problems when the baby is born. CDH is rare, occurring in about 1 in every 2000 to 1 in every 5000 live births. This relatively simple defect in the diaphragm disrupts cardiopulmonary (heart and lung) physiology, threatening the baby’s life. Although medical therapy continues to improve, survival remains around 75%. No one knows exactly what causes CDH and mothers can do nothing to provoke or to prevent CDH.

What Problems Can Arise from the Compression on the Developing Lungs? 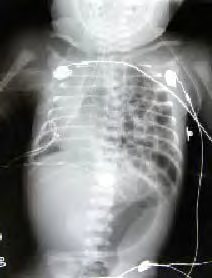 These problems lead to an unfortunate downward spiral in that the small surface area of the lungs decreases oxygen content and increases carbon dioxide (CO2) content in the blood. The low oxygen and high CO2 cause abnormal blood vessels to squeeze, cutting down on blood flow to the lungs and causing the right heart to fail or to “shunt” blood around the lungs. The decreased blood flow to the lungs drops oxygen and raises carbon dioxide further. This cycle continues to repeat and if the cycle is not interrupted, the baby will die.

Not every baby with CDH falls into this cycle. Some babies are hardly affected, while others die before birth. But most require advanced medical care including careful mechanical ventilation, special inhaled and injectable drugs, sedation, and sometimes even a form of heart-lung machine called ECMO.

What Other Issues can arise from CDH?

What is the Treatment for CDH?

What is the Expected Outcome for my child?

Despite advances in medical and surgical technique, overall survival remains around 75%. It is helpful to think of three groups of babies with CDH: those who have little dysfunctional physiology; those with such severe physiological disruption that no intervention will allow survival; and, the largest group, those who need support and can be "recruited" to survive. Since the overall survival has changed little, we can surmise that the group that will die despite any treatment has not changed in size. Instead, those recruitable babies tend to have fewer problems and long-term disability. Still, despite advances, some babies will have long term problems like reactive airway disease, right heart dysfunction or neurologic issues.

The severity of a baby’s problems is difficult to predict before the baby is born. Some ultrasound measurements may suggest which babies will do poorly, but no measures reliably predict how sick a baby will be or the "probability of survival". While most babies survive, others do not, and some survivors have chronic diseases. Regardless of any "odds", your doctors and nurses know how to give your baby every advantage to gain the best possible outcome for your child.

Disclaimer: Your child's condition is unique. The information contained on this web site is not intended to substitute for advice from a doctor or nurse. If you are unsure about any aspect of your patient's care, please contact us at (303) 839-6001, or talk to your pediatrician.